Renewal invoices were sent to the main contact on your membership. Reach out to AAA staff with any questions about your membership!
Membership Renewal FAQs
Renew before December 31, 2021!

Tens of thousands of Austin residents continued to have no running water Friday, as the extended freeze showed widespread damage to the city's water system.

As the city's electricity crisis has evolved into a water crisis, it has left officials scrambling to identify line breaks and calling for assistance from the federal government and neighboring states to provide drinking water. 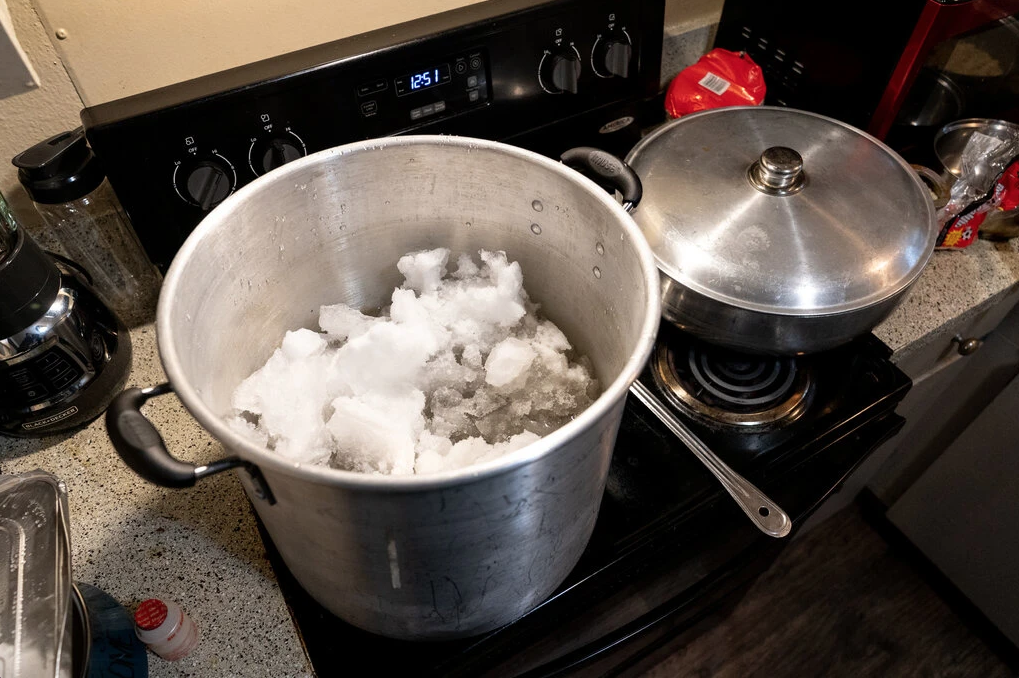 Here’s how to use snow when there’s no water flowing from the faucet - One Austin family whose electricity was restored but who still lacked water melted snow for toilets and dishes. Experts say there are techniques that make the process more efficient. Photo credit: Ilana Panich-Linsman for The New York Times

City officials still had not provided a timeline for when full water service would be restored.

"We don't know how long it's going to take to have integrity in the system," Mayor Steve Adler said in an MSNBC interview Friday. "It's apparent that there's a significant number of (water main) breaks."

Adler said 1 million gallons of water were being shipped from neighboring states to Austin on Friday for distribution. As of early afternoon, details on how to get access to that water were not available.

The lack of those critical details has left some Austin residents frustrated.

"All I have heard from Austin Water is that I am under a boil water notice," Anderson Mill resident Kristen Pettineo said. "I don’t have water to boil."

The city has purchased water from the Federal Emergency Management Agency and was working to set up distribution sites, city spokesman Jeffery Patterson said.

An outage map published Friday showed vast swaths of Austin's water system were experiencing outages, but it was unclear which individual neighborhoods and streets were affected.

Only the city's two central pressure zones, which cover large portions of Central, Southeast, East and Northeast Austin, had "low pressure" in the water system, according to Austin Water. The remainder of the city showed water outages.

Austin Water director Greg Meszaros had said on Thursday that "many tens of thousands" were without water service.

"It is a large portion of our customer base," Meszaros said.

"Tens of thousands" of leaks in the system have wreaked havoc on Austin's water supply, Meszaros said. That has been compounded by an untold number of burst pipes in homes.

"That is an incredible amount of water and nothing I've ever seen before at that rate," Meszaros said, "So that's what we're managing is to not return to that state of affairs, where 100 million gallons of water could leak out of our system in one night."

It means Austin Water will need to methodically restart portions of the system to prevent leaks.

Stay updated on the storm and outage updates in Austin: Send us a text messag

Reservoirs are now being refilled. Because of the locations of water treatment plants, Austin Water will pressurize the two central Austin portions of its grid before that water is pushed elsewhere.

The effect has been felt acutely in the city, where a loss in water pressure forced evacuations at St. David's South Austin Medical Center late Wednesday.

But it has not been isolated to Austin.

Like Austin, Pflugerville is under a boil water notice until further notice. Manville Water Supply Corporation officials also issued a boil water advisory for their customers as they have faced intermittent service.

Water systems under a boil water notice likely will face a logjam from state regulators as water pressure stabilizes. The Texas Commission on Environmental Quality requires testing to ensure no unsafe bacteria is in the supply before lifting the advisories.

Baker, the Texas Commission on Environmental Quality executive director, said his agency is coordinating with the Environmental Protection Agency to bring in mobile testing labs from out of state.

But timelines for water service to return to normal remain elusive. That has been frustrating, said Pettineo, whose Northwest Austin home has not had running water since Wednesday.

"I just feel like this is such a catastrophic failure on every level," she said. "If I wasn’t so consumed with finding a functioning shower or a functioning toilet, I would be so angry."