We are here to serve you!  Because the health and safety of our members is critical to AAA, we will continue to follow our COVID-19 Health & Safety Protocols.  When visiting the AAA, be sure to wear your mask. You will be required to have your temperature checked and complete a COVID release form, upon entering the building.

All in-person events, programs and meetings of groups larger than 10 will be held virtually or will be held outside, following the proper mask and social distancing guidelines through April 21, 2021. 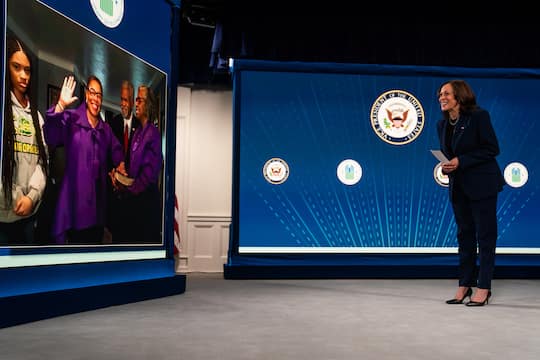 The Senate voted 66-34 on Wednesday to confirm President Biden’s nomination of Rep. Marcia L. Fudge (D-Ohio) as secretary of housing and urban development, making her the first Black woman to lead the agency in more than four decades.

Fudge, who entered Congress in 2008, won bipartisan approval to lead the embattled agency, where the morale among civil servants had plummeted under the leadership of Ben Carson, who weakened fair housing enforcement and other civil rights protections during the Trump administration.

“The past year has reminded us just how important it is to have a safe and stable place to call home. But, right now — for millions of Americans — that sense of security and peace of mind is out of reach,” Fudge said in a video statement released after she was sworn in Wednesday evening.

She added that she looks forward to providing relief for families struggling to pay their rent and mortgages, helping more Americans achieve homeownership, and breaking down the “barriers of injustice.”

Fudge, 68, had said during her January confirmation hearing that her priorities include ending discriminatory housing practices as part of Biden’s focus on dismantling systemic racial injustice and boosting Black homeownership, a crucial component in narrowing the racial wealth gap.

Biden, in executive orders pertaining to racial equity in January, sought to strengthen anti-discrimination housing policies that were rolled back under President Donald Trump.

As HUD secretary, Fudge is expected to reinstate a 2013 rule aimed at barring the housing industry from enacting policies that, although seemingly race-neutral, have an adverse effect on Black and Latino Americans. The agency also is expected to reinstate another Obama-era regulation requiring communities to identify and address barriers to racial integration and disparities in access to transportation, jobs and good schools — or risk losing federal funding.

One year into the coronavirus pandemic, which has left a disproportionate number of Black and Latino Americans jobless, Fudge said her immediate focus will be on providing rental assistance to households at risk of eviction.

More than 11 million households are behind on rent, census data shows. Almost 3 million homeowners are in forbearance, Fudge said; an additional 800,000 borrowers are delinquent. Families struggling to pay rent continue to be served with eviction notices despite the government’s extension of the eviction moratorium.

Several Republicans had criticized Fudge during her confirmation hearing before the Senate Committee on Banking, Housing and Urban Affairs for previous comments she had made about race and the GOP that they characterized as “intemperate.”

Other Republicans voiced concern about Fudge’s intent to undo HUD regulations put in place by the Trump administration to address what conservatives view as costly and time-consuming Obama-era fair housing requirements that they said discouraged the construction of much-needed affordable housing. Seven of the committee’s 24 members had voted against advancing her nomination.

On Wednesday, Sen. Patrick J. Toomey (R-Pa.) said before voting against Fudge’s confirmation that her “past rhetoric makes clear that she lacks the temperament to collaborate with Congress, particularly across the aisle, and casts doubt as to whether she wants to.”

But Sen. Rob Portman (R-Ohio), who had previously worked with Fudge to address the affordable housing crisis in their home state, has vouched for her ability to work across the aisle. “I don’t always agree with Marcia on policy. She doesn’t always agree with me. But I can speak to her integrity, her commitment to justice and [the] strength of her character,” Portman said during Fudge’s confirmation hearing.

Portman was among 16 Republicans who voted in favor of Fudge, including Mitch McConnell (Ky.), the minority leader, and Tim Scott (S.C.), the lone Black Republican in the Senate. Democrats unanimously approved her confirmation.

Moments after Fudge was confirmed, House Majority Whip James E. Clyburn (D-S.C.) stood across the Capitol with aides carefully reviewing the Senate vote. Clyburn, the most senior Black member of Congress and a close Biden ally, served as Fudge’s top patron in promoting her for the Cabinet. He took careful note of which Republicans voted yes as aides showed him the tally.

“This is a refreshing turn and, quite frankly, a relief,” said Lisa Rice, president and chief executive of the National Fair Housing Alliance. “Instead of trying to convince the HUD secretary to uphold our nation’s fair housing laws, we now have someone who believes in the full breadth of the law and is committed to completely enforcing it.”

Before her time on Capitol Hill, Fudge, a former chair of the Congressional Black Caucus, had served as the first African American and first female mayor of Warrensville Heights.

Fudge on Wednesday voted to pass Biden’s $1.9 trillion coronavirus relief bill, which includes more than $20 billion in emergency rental assistance. She then resigned her congressional seat and was sworn in as HUD secretary in a virtual ceremony from her Warrensville Heights home, with her 89-year-old mother by her side.

Patricia Roberts Harris was the first Black woman to serve in a presidential Cabinet after President Jimmy Carter appointed her HUD secretary in 1977.